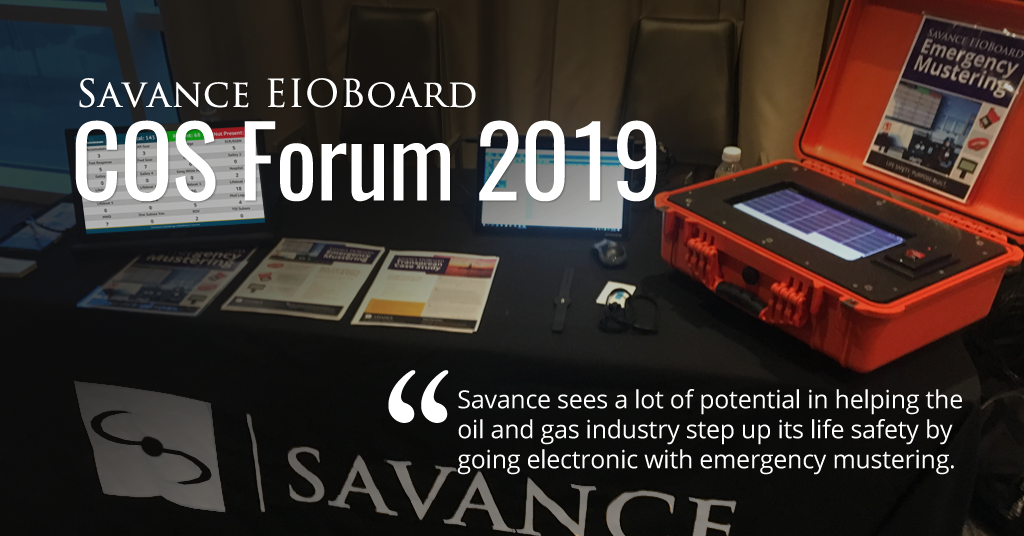 September 23, 2019 in Savance Workplace by Sofia

Although we always hope to be able to leave a trade show or conference on a good note, it is important to accept that things can’t always go our way – and be able to admit (temporary) defeat. That’s how this year’s COS Forum went. For some reason, this year was bit slower for Savance. We didn’t see any major drilling contractors on the attendee list like we did last year – and they are one of our prime targets. Instead, attendees mostly included producers like BP and Shell, and smaller platform operators with typically a small crew of operators, not as concerned about mustering several people in the shortest amount of time.

Despite being right by the food and the entrance to the main hall, we had significantly less booth traffic than last year. Even the traffic we did have did not seem to be the right fit. Not sure if interest was lower because of the crowd or if people were already educated on our solution from last year and our video and prior communications, or maybe a combination of both. Either way, we left feeling a bit discouraged with the oil and gas industry overall.

Last year, there were several major drilling contractors and several other exhibitors, and this year there was only one other exhibitor. We had really hoped the industry as a whole was on the way up but unfortunately it’s not there yet. We were actually a little reluctant to exhibit the Forum again this year, and the lack of booth traffic reaffirmed our concerns.

Despite the disappointing outcome of this year’s Forum, Savance sees a lot of potential to help the oil and gas industry step up their life safety by going electronic with their emergency mustering, but the state of the industry has made it difficult to generate enough interest for our efforts to pay off at the moment. Hopefully, by next year, the industry will turn around and we’ll be thankful we stuck it out.